The importance of this topic can’t be stressed enough.  You must develop a mentality to always test everything you do, before rolling out in a big way.

I have seen numerous cases where a business person has “THE GREATEST IDEA EVER IN THE HISTORY OF MANKIND!”

You know the idea.  You have probably had it yourself.  The one brainstorm that will end your financial problems overnight.

It could be a seminar, or a TV ad, or a direct mail piece, or brochure, or whatever.  You just know that it is going to be a winner!

How do you know this? Well, first of all, your spouse agrees with you that the idea is great! When you bring it to the office and share it with your employees they also agree that you have a winner.  Everyone you talk to sees that you will be retiring in the next few months.

You then decide to get things moving.  The advertising people are brought in.  The graphic artist is hired, the printer is contacted and new websites are being developed as we speak. 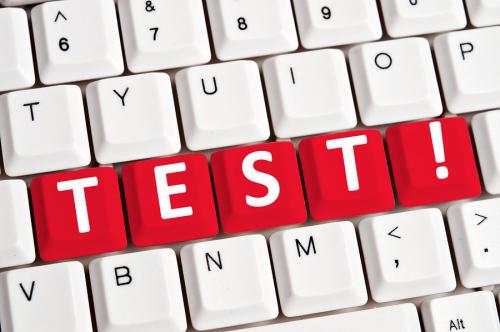 All the steps are falling into place.  You have spent a pretty hefty chunk of cash, but it will be worth it.  This is the break you have always been waiting for!

Finally, the deal is in gear.  Things are going to explode.  And you wait.  And wait some more.  Nothing.  Nothing is happening what is going on?

Two days later, you are very depressed.  The whole thing was a big disaster.  All that money down the tubes.  What went wrong?  Everyone agreed that this was a big winner.  How could this happen?

What went wrong here was not the idea or the actions taken.  The problem was very simple, yet something that people ignore over and over again.

You see, the fact that you and “everybody” think that this idea is a stroke of genius is basically irrelevant.  You and your sounding boards may be well intentioned, but there can be no validity placed on your opinions.

The only way to know for sure is to do a test.  A small test, yet big enough to see if your idea has the slightest bit of merit.

For example, if you are going to a mail out, instead of sending out 10,000 pieces, why not send out 500 first?  See what happens.   If you get a 1/100 of one percent response, then you will want to redo or forget this mailer.

If you get a 3% response, then you have to do another test.  Every time you have a successful test, I suggest you repeat the test to see if the results were a fluke, or reproducible.  If you get similar results the second time, then roll it out.

Save your money.  Don’t ever go big time with anything until you know it is a winner.

Other ways to test ideas are to use business networking groups.  If you have an idea that will appeal to the masses, pitch to a couple of business groups, even if they are not in your area, and see if people respond.  If they do, you can fine tune your pitch by seeing what questions are asked, and what the people who call are most interested in.  You can ask someone to video you and use it to word your idea exactly the right way.  How’s that for a free way to test?

The only way to know if the piece is really good is if their first response is that they want to know how to get whatever you are pitching in the letter!  If they have been so compelled by the copy to ask about the product or service, instead of telling you what they think about the piece, you have most likely got a good selling tool!

Keep in mind, you must be a student of what is going on around you.  You must be aware of what is happening to the marketplace, and react accordingly.  But here’s a ten-star tip:

You must never assume that the way you think is the way other people think!

I have seen many professionals go bye-bye because they were so sure that they had a handle on the marketplace, and they wouldn’t adjust their thinking to market demands.

They felt it was not their misleading of the wants of their customers.  They felt that these prospects weren’t getting their all so important message.  They would not admit it was their problem.

This type of ego trip will put you in a big hole.  Don’t ever feel bad that an idea you had didn’t work.  That lesson is as important as finding what does work!  You will not waste any more time or money on ideas that have bombed.

Thomas Edison tried thousands of compounds for the filament of his electric light.  Every one that didn’t work was logged and no more time was spent on that material.  He was always sure that knowing what didn’t work was just as important as what did!

DO NOT REPEAT AN AD THAT DOESN’T WORK!  TEST IT ONCE! DO NOT LISTEN TO AD REPS, AS THEY HAVE ZERO CLUE ABOUT WHAT YOU SHOULD DO!  IF IT WORKS, TEST IT AGAIN!  IF IT BOMBS, MOVE ON!

By the way, if an ad bombs, it can mean any one or combination of the following:

For example, let’s say that you’re in the Business Section on a right side of a page.  And you spent $60 and got four leads.  Now, you have several variables to look at, before you can decide to re-test.

If, for example, you’re sure it should be in the Business Section on Sunday, on a right hand page, then test something like this ad, with a different headline and thrust, the next time:

And this time, you get 20 leads from the same $60 ad cost!  Now you know it was the ad/headline and not the paper/position/etc.  if, on the other hand, you still only got a couple of leads, then it’s probably a bad topic to run in that particular place.

See what I mean?  Now, if the ad hits big time and you test it a second time, and it still hits big time, then your next step is to make it bigger…editorial style, full article ad, using the same headline with more copy.

When the ad works, you go to editorial-style and you should be getting the lowest lead cost possible.  But, only do this when a small, headline-ad pulls low lead costs!  If the ad stinks when it’s little, it’ll probably stink when it’s big, only costing you a lot more money!

What if you get lots of calls, but less than ½ of the people are leaving their names?

Then, you need to change your message!  Sometimes, for whatever reason, a different message gets more names.  If you are using a one-minute message and it’s not working, then try a shorter one…something like, “Thanks for calling the Cellular Savings Hotline.  Please leave your name and address after the tone, and we’ll get your FREE report right out to you!” or whatever.

See, every aspect of your marketing needs to be tested, including your recorded messages.

Never Test More Than One Changed Variable At A Time!

If you mix up variables in tests, how do you know which thing is working or not working?

Please don’t forget this point.  It is very critical to testing success.  Next.

You should not have to spend over $100 to test an ad.  You’d be surprised how many publications will run ads very inexpensively.  I’m telling you…oh, if you’ll excuse me.

If you check your local area and find that your options are 2 or 3 major publications, then an option could be to check out your local library and see what other publications are available.  Remember this is a test for your ad, nothing else.

Something you need to know.  Success comes from looking beyond the obvious.  It requires the ability to see past what everyone else sees.

For example, when you see the bigger papers as the only ones your “upscale” prospects would ever read, you’re being shortsighted.  You’re assuming that because you read that paper that everyone else does as well.  Let me tell you something, it’s simply a huge mistake to think that way!

One of our members in a moderate size city tried the bigger papers, and he got lead costs that were too high.  He decided to try the shopper paper and still had lead costs that were higher than he wanted.  But, when he put the ads on the front or the back of the paper, his lead cost plummeted to around $4 a lead!  He runs the ads every couple of weeks, for $100, and gets 25-30 leads each time!

He discovered that the inside of the shopper was not nearly as responsive as being on the outside of the publication.  Obviously, people pick them up, and don’t read them.  But, he found that with the ad on the cover or back, people noticed it as the shopper lay on the kitchen table…and they called the #1300.

One more point about this type of advertising.  I can’t guarantee you that every headline will work.  That’s why we are always giving you so many examples and coming up with new ones all the time.  But I do guarantee that the direct response, emotional formulas we show you are the only ones proven to work, year-in and year-out, for decades!

So if one headline doesn’t get it, you’ll have to test until you find the one that does work.  It is out there.  I promise you that the emotional approach is the only one that has ever been proven to be successful!

To summarise:  Be creative and to take your ego out of the equation.  Testing is the most important way to be a smart survivor!  Don’t ever feel like something is a failure if it doesn’t work.  No matter what you do, you’re not seeing failure or success.  You’re just seeing results.  Nothing more.  Nothing less.  Just results.

The bottom line is this:  The only true measure of your idea is what the market tells you with real, live testing!  All the conjecture in the world will not replace a well-designed test!

And please remember, you have to test everything new and you must continue to test against things that work – to see if you can find something that works even better!

Marketing Secret #40 The Power Of Repetitive Direct Response To Leads

Looking for quick tips, hints and tricks to apply in your business?  Great! Enter your details below to receive updates to help you move forward confidently, profitably.